It’s quite an overwhelming experience to go through the maps and diagrams of Malkit’s Atlas; one zooms in and out of space at an enormous range of scales, from the entire Middle East region, through city plans, down to property parcels in small Palestinian villages; one sees time stretched out to encompass a thousand years of history, from the biblical era to the present, and then compressed into micro-histories of, for example, the recent decades of peace negotiations; one sees an entire repertoire of architectural equipment– gates, road blocks, checkpoints, outposts, observation towers, tunnels, and so forth—that comprise the landscape of occupation, and on and on and on.  If only in its sheer proliferation of detail, the Atlas defies passive contemplation and demands a praxis of engagement, which is, for me, actually one of its strongest features.  For me, it’s these precisely registered details that render the Atlas not only an illustration of a conflict I already know, or at least think I know, but also a source of new knowledge and new questions about that conflict and, more particularly, about the spatial processes by means of which that conflict has been advanced.

The space depicted in Malkit’s Atlas is not a stable, static space, or even a space that’s simply contested. It is, rather, a space that is in constant flux: its borders are continually expanding or contracting or sometimes proliferating into an array of forms; its surface is riven by shifting arrays of lines and zones and landscapes and architectures; it has a depth, penetrating down to water tables; it has an altitude, extending into air space; and so what the Atlas reveals is a space that is not only contested but that is, also, forming and transforming as a consequence of that contestation—a space that is far from an empty field on which political events take place and that is, more precisely, itself political, itself imbricated in the imagination, legitimization and actualization of political claims.

It also seems to me that the sheer material and territorial detail accumulated in the Atlas portrays not only the macro- and micro-geographies of power but also the inevitable discontinuities and gaps and contingencies that take place when power is spatialized. What logics and ideologies and knowledge practices have to be added to Zionism to result in the very specific architectural and territorial conditions that are mapped in Malkit’s Atlas?  This question points, I think, to the lesson of genealogy, the lesson that conditions of genesis do not and cannot ever determine the actual form or functioning of the objects that emerge from those conditions. So here, the Atlas invokes future work on the particular sorts of architectural and landscape and preservation practices, property regimes, and infrastructure planning that has accompanied the spatial development of Israel and Palestine.

In the introduction to the Atlas, Malkit writes of her interest, as an architecture student, in learning about the spatial history of her country. She describes how she began to collect photographs, maps, diagrams and other visual material because, she says, “textual testimonies simply weren’t tangible enough for my purposes.” This shift from texts to things is worthy of further comment, I think, because it maps onto a larger and very consequential shift that has been occurring in human rights and activist work over the last decade, a shift from attention to the testimony of human witnesses to seemingly objective material evidence, from photographs and videos, through images captured by satellites, to the kinds of maps that Malkit deploys so powerfully in the Atlas.

The testimony of witnesses has played a large or even fundamental role in things like the emergence of a global human rights regime, in truth commissions, and in a whole array of other institutional responses to political violence, and it’s for this reason that some historians have called the era at the end the 20thcentury “the era of testimony” or “the era of the witness.” What they’re pointing to was a new kind of attention being paid to victims and survivors of violence, a new politics of witnessing, and, along with it, new notions of political responsibility.

It seems to me that Malkit’s Atlas could be considered as part of a more recent turn away from the era of testimony and a turn towards a new era when it is things, and not people, that are becoming privileged sources of information about conflict and violence.  We could think here of the recent emergence of forensic anthropology and forensic architecture; and it would not be too great a leap to think of Malkit’s Atlas as a preliminary form of forensic geography. This shift from the testimony of a victim or a survivor to that that of an expert speaking about or on behalf of a thing of course involves a whole array of other shifts: from an interest in memory to an interest in information, from the solicitation of an ethical response to the solicitation of a legal one, and a whole host of others transformations.

But what all of these transformations involve, in one way or another, is recourse to interlocutors who can speak on behalf of things—the forensic expert who can see things as evidence of violence, the violence that altered them, the violence that may have been responsible for their destruction. What the Atlas of the Conflict does is suggest some of the many ways that architectural expertise can be deployed on behalf of the things—from buildings to landscapes—that have been shaped by conflict and violence—how, in other words, architects can participate in the project of making things speak like witnesses.  Here, architecture becomes a form of translation, a way of representing spatial and material conditions in visual form. At a moment when new attention is being paid to the spaces of conflict and violence, the Atlas of the Conflict provides some very suggestive ways of thinking about how architecture might inform and intensify that attention.

The architect who renders the space of conflict a witness to that conflict also becomes herself involved in conflict.  Ranciere talks about politics as revolving around the distribution of the sensible—what is seen and what is not seen, what is heard and what is not heard, and so on. This is why the Atlas of the Conflict is not, despite Malkit’s protestations, a non-political intervention and why it is best considered not an objective and straightforward documentation upon which there could be no disagreement but rather a document that will sharpen disagreements in productive ways, ways that could become incompatible with violence. 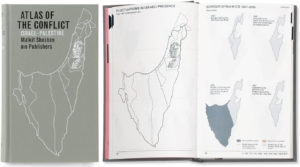 Andrew Herscher received his PhD from Harvard University in 2002. His work explores the architectural and urban forms of political violence, cultural memory, collective identity, and human rights, focusing on modern and contemporary Central and Eastern Europe. He has been particularly involved in the Balkans, where he has worked for the International Criminal Tribunal for the Former Yugoslavia as an investigator and expert witness on the war-time destruction of cultural heritage; directed the Department of Culture of the United Nations Mission in Kosovo; and co-founded and co-directed the NGO, Kosovo Cultural Heritage Project. His scholarly work has appeared in such publications as Architectural History, Assemblage, Grey Room, Harvard Design Magazine, Journal of the Society of Architectural Historians, Oxford Art Journal, and Theory and Event. His book, Violence Taking Place: The Architecture of the Kosovo Conflict, was published by Stanford University Press in 2010 in the series “Cultural Memory in the Present.”  At the University of Michigan, he is jointly appointed to the Taubman College of Architecture and Urban Planning, the Department of Slavic Languages and Literatures, and the Department of Art History.  From 2005 to 2009, he also coordinated the Rackham Interdisciplinary Seminar on Human Rights.