Link to the complete article

Reaction to the article:

Parts of the interview in english:

GW: After putting all the maps together in this atlas, did it change your own view on the conflict? In what sense?

MS: There are two major realizations that I had while mapping the Palestinian reality next to the Israeli one.

One, making the atlas, the maps, was a long process of discovery, I have learned every day new things about the conflict and its complexities, and of course about my country.

Second, it gave me a different view on the way architecture and spatial planning can be used to facilitate the execution of national and political agendas in space, in reality.  We produce images of desired reality that eventually become reality. In the case of Israel-Palestine, the desired reality was motivated by national agendas and it was executed regardless what was actually on the ground.

For me the desired reality, the plans and masterplans of the new condition, the Jewish state, was a day-to-day life. I was part of it, I grew up into it.

Mapping the un-mapped, the un-recognized was overwhelming. I realized the scale of transformation of the country from one condition to another.

Along the all process, I kept my position as an observer, who analyses what is there. Capturing the found reality, with out an agenda, but the desire to learn the mechanisms, the processes, the transformation, and their scales.

Eventually, I hope that my biggest contribution to the conflict was to make its hidden dimensions visible.

Hopefully, by describing reality as it is, a new condition can emerge, a new status qua, that is based on equality, rather than on a national agenda.

I don’t believe in nation-state as a sustainable alternative, I think that every country, government and, or power structure should serve its population and citizens equally, regardless their religion, ethnicity or skin color. I think it is just simple, like that.

It is about equality rather than the color of the flag, or the name of the country.

GW: Proves your atlas that spatial planning is being used as a political weapon by Israel?

MS: Spatial planning is a very powerful tool, what we plan, everywhere, is usually coming on top of something else. In Israel, I have learned that emptiness can never be a state of reality. Plans are meant to generate changes, to preserve, to construct, or to destroy. Mostly all of these conditions are interlinked to interest, when designing and executing a plan. The client agenda, if it is a state, a policy maker, or a private consumer, defines the relations between what we destroy, what we construct and what we decide to preserve.

I think it is important to be aware of the power of planning and of the drawings.

In Israel, the agenda was very clear, to create facts on the ground, a Jewish State, and spatial planning was one of the most powerful instrument that used to facilitate this vision. In the case of Israel-Palestine,  one nation’s dream is another nation’s catastrophe. You can call it a dream-comes-true, or a weapon.

GW: You say that territorial analysis can provide insight to other conflicts. What are you thinking about? Tibet? South Africa? Sri Lanka?

I worked for a while in the South Caucasus, also there you can find very dynamic fluctuation of borders, where ethnic groups are being displaced and figures new nation-states. Like, Armenia for the armenians; Georgia for Georgians; Azerbaijan for Azeris and so on. With border-lines movements a new reality is created. Again, one’s nation victory is another nation’s disaster. But we are not talking about nations, we are talking about people, families. Moving border lines means destruction, displacement, buffer zones and enclaves. You can hear terms like ‘the greater nation’, or day-to-day manner of talking that de-humanize groups because of their ethnic background, you can also read these in space.

Nevertheless, conflicts can be found everywhere, these days I am researching, for example, the emergence of Almere and its relation with Amsterdam. It is a moderated conflict, in a different context and intensity, but the role of spatial planning in redefining the way people leads their lives has many similarities, such as the on-going displacement of Amsterdam’s inhabitants to Almere, and that in relation to the strata Amsterdam wants to keep for itself, or want to send away, to Almere.

Form the Atlas, one can clearly realize that when analyzing spatial plans along a period of time, one can identify patterns and policies. 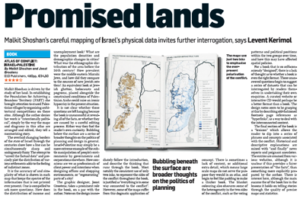 GW: It was very difficult to find Palestinian documentation. Who is to blame for that lack: counterwork of Israel or was it Arab laxity?

MS: I don’t know who is to blame. Maybe it is both.

Occupying powers along the history always documented and mapped their captured lands. They rarely mapped the indigenous people, the natives. In a way, the Atlas of the Conflict, reclaims the practice of mapmaking. It documents the existence of the unrecognized, the un-documented. It dismantles the capacity of governmental institutions to represent selective reality.

I would like to see my maps as dynamic snap shots. They are thematic, but they are not staged. I think when holding a political, ideological agenda, many times the practice of mapping is correlated with the practice of make-believe. Palestine was occupied for centuries, it was always documented from the prospective of the occupier, by the Ottomans, by the British and then by the Israelis. It was interesting to have a constant  comparison of these two realities, Israel and Palestine, on the same intensity.

GW: Why have you chosen for a small size? It seems almost a kind of Bible.

MS: During the process of making the atlas, we had some discussions about the format. While Joost Grootens, the designer, who worked with me on the book, was inspired by an old French tourist guide, I always called it the bible. Unconsciously, and without entering into religious argumentation, but remaining with aesthetics, for me, it felt as if “holly-land” needs a new bible, a new status-qua, it was fun playing with this idea.

In addition, I think that part of the process of dismantling the power of the book -of the Atlas- reclaiming it from its institutional look, large and uncomfortable. A small format was a smart decision.

If like a bible or a tourist guide, the small format makes it much more accessible, less threatening. You can carry it in your pocket and when you hold it, it fits perfectly in your hand, you just want to continue reading. In that sense, as it is my first book, I was happy to have Joost on board. I think he is a brilliant designer, he could easily capture these discussions and nuances, and shape them into this great format.