Malkit Shoshan’s book is a fascinating attempt to show and tell the story of the Israeli-Palestinian conflict through the use of maps and graphs that allow the reader to view the area’s territorial, political and demographic transformations. The atlas, which includes more than 500 maps and diagrams, is divided into ten chapters that focus on different themes: the border, the construction of the wall, settlement patterns and types, demographic change, land ownership, control of water resources, territorial planning, the area’s important (and strategic) cultural and archaeological heritage and a focus on the contested city of Jerusalem. 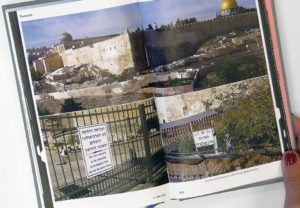 At the end of the map section, in a section called “lexicon,” the author has collected definitions, stories, events, technical information, pictures and images which complement and enrich the maps.

Two further chapters concern the succession of historical events and the negotiation of borders and territorial management. These last parts convey information deriving from different sources (including Wikipedia), presented uncritically by the author, who, at the beginning of the book, declares that he is not always in agreement with his sources. 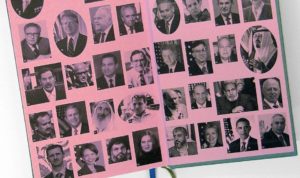 All of the book’s maps and sections are interconnected through a system of multiple links that enable the reader to move from graphic display to textual information and vice versa, with the goal, not always simple, of connecting the different parts without resorting to a linear order. Shoshan’s archival research, data organization and graphic representation is undoubtedly a major and original effort. The Israeli-Palestinian conflict is based on territorial control and population distribution, natural resource management and the fragile demographic balance between Jews and Palestinians. It follows that the use of maps is an effective and compelling way of describing and narrating the conflict. In addition, the maps allow the reader to easily view the changes that have concerned the boundaries separating Israeli from Palestinian territories from 1947 to the present, as well as the evolution of the construction of the separation wall, the movement of the two ethnic groups and the process of Jewish settlement in the Territories. 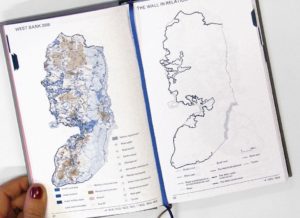 Nevertheless, geographers of the so-called school of critical cartography have taught us that there are no neutral maps and that the representation of an area creates linkages between geographical knowledge and power. The maps in Shoshan’s book attempt to show “things as they are” in their temporal evolution but they cannot be considered neutral because they face such issues as ethnicity (not always easy to define) and are based on data collected primarily by Israeli authorities. The political maps produced during the war in the former Yugoslavia are examples of how seemingly neutral representations can often hide a political will underlying power relations. Therefore further effort would have been desirable to offer a critical reading of the maps highlighting the inevitable limitations of cartographic reproductions of a given territory.

In this regard, some of the maps in the volume contain extremely useful and interesting data, for example, the location of Jewish settlements in the West Bank, but they are not enriched with information regarding their geographic configuration (mountains, valleys, rivers, etc.). Such information would help the reader understand the reasons underlying certain choices of settlement locations as well as their impact on surrounding areas. 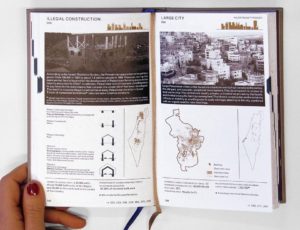 Shoshan’s operation, however, brings to the fore the importance of the territorial dimension of an extremely complex conflict about which much has been, and continues to be, written. Experts will find useful information along with the possibility for synchronically visualizing various data and aspects relating to the conflict; for beginners, it could be an original, and undoubtedly courageous, way to approach a difficult-to-understand subject without any ready-made explanations or interpretations, perhaps as an accompaniment to an historical text integrating the maps rendering them more legible. Anna Casaglia