“The Israel-Palestine conflict is a highly complex issue and to create an atlas based on it is to make a statement. Its ingenious design in the form of a pocket atlas brings structure and light to the chaos. The reader encounters a bright, magnificently designed book offering insights into the development of regional and state planning. The meticulously drawn charts are every bit as fascinating as the extensive mapping, the documentary photography and the encyclopaedic texts. Typographical hyperlinks join the two chapters and thus mutually complement the cartographic and source material. This book constitutes visual communication of the highest order. An instrument to facilitate understanding, discussion and reflection. Not a gratuitous design book but one which is both essential and eminently usable.” (Jury report)

Book description at the prize ceremony:

“For more than 10 years, Malkit Shoshan, an Israeli architect, has worked on the question of how to make the Israeli-Palestinian conflict visual. She has, with her team, transformed words into images, diagrams and an extensive series of self-drawn maps. She has gradually developed a way to structure the visual information into themes and sections as exposed in the book. In the past few years, designer Joost Grootens has collaborated with Shoshan to transform her work into a book for 010 publishers. The success of this collaboration of two designers, each with their own perspective and expertise, can clearly be seen in the result, the Atlas of the Conflict.” 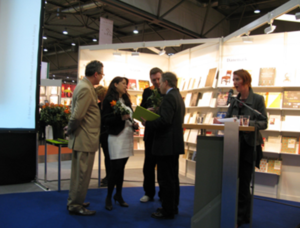 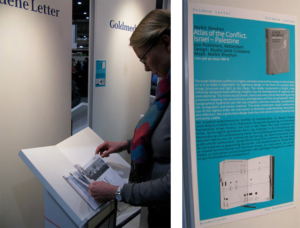